A very friendly & professional service. Dave & Miguel constantly kept us in touch from the start of the job until the end. They gave us valuable advice on the selection of paint to keep the newly painted house more beautiful. We strongly recommend Findécor to those who are looking for a well respected company to paint their houses.

Hi Dave, Thank you for the prompt consultation, keeping in touch regularly and then fitting us into your busy schedule. The entire experience, from friendly communications to the on-site work process went much smoother than expected and we are absolutely delighted with the beautiful results. Having FinDecor paint the exterior of our house was the best decision we’ve made to enhance our home for years to come. Thank you Dave and Miguel, for your friendly professionalism and excellent work.

Dave and his brother Miguel did a fantastic job painting the exterior of our home. Communication was excellent from the beginning, the work was quality and priced competitively, the team was professional. We are happy that we painted our home with FinDecor.

If you put your trust in Dave (Findecor) and his crew, you will NOT be disappointed….guaranteed!

Extremely punctual, polite,clean and did everything in a very professional manner.The house looks fresh, and I could not be happier. Thanks very much.
Voir tous les avis

Recently, a client, let’s call him Robert, called us for a problem with a stucco wall on his home. We went on-site in order to evaluate the problem and give a free estimate for the stucco wall reparation.

The wall in question was part of his bedroom. Robert told us that each morning, between 5:30 and 7:30, he heard a noise coming from the wall. This was the first time that we heard about such a problem and we had to perform detective work to understand the cause.

We listened to and even recorded the sound coming from the wall. It wasn’t only the sound of the wind: it was more similar to the sound of thunder. Thus, that noise could not be caused solely by a faulty caulking. By asking questions to Robert, we discovered this noise problem started recently, and that the problem was not there last winter.
He also explained us that a vinyl wall was there before, and when it was rebuilt, they only added the stucco in front of it without removing the vinyl. By examining closer, we observed that, when we pushed on the wall, it moved, which indicated there was a void inside the wall. That’s where it became clear.

The noise that woke up Robert each morning at sunrise was caused by expanded polystyrene granules inside the wall that moved with the temperature change. In may, the surface temperature of the exterior wall quickly went up until 30 degrees Celsius in the first few hours (stucco warms faster than wood), while inside the wall, the temperature stayed at approximately 5 degrees. 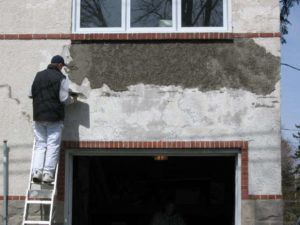 The solution FinDecor suggested was to redo the entire caulking between the wall and the brick, and then to paint the exterior wall in semi-gloss white, which is the same color as the house, in order to lessen the temperature variation. This way, the wall won’t make any more noise and Robert won’t wake up with the sun again!

You Need A Painter For Your Stucco Walls?

If you are looking for an expert to restore, repaint, or create a new stucco wall, FinDecor experts can help you. We have the required experience to resolve a great variety of problems and accomplish various projects. No challenge is too big! 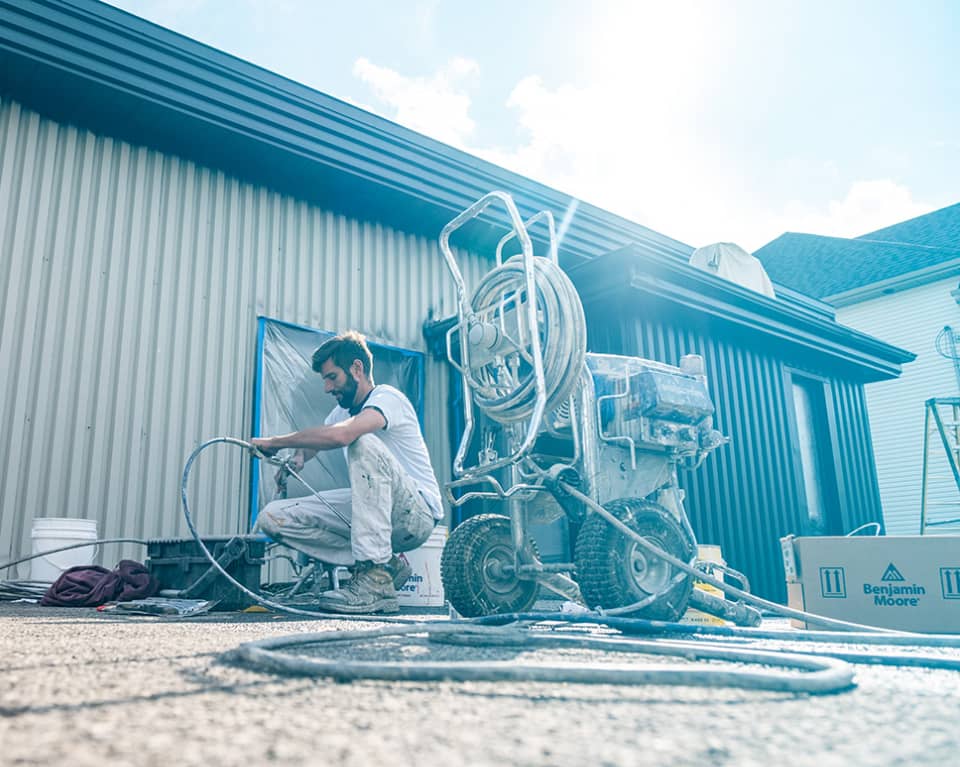 Submit your project and we will be happy to contact you! Please include your photos and details of your project, this will help us get a better idea of the work to be done. Thank you!